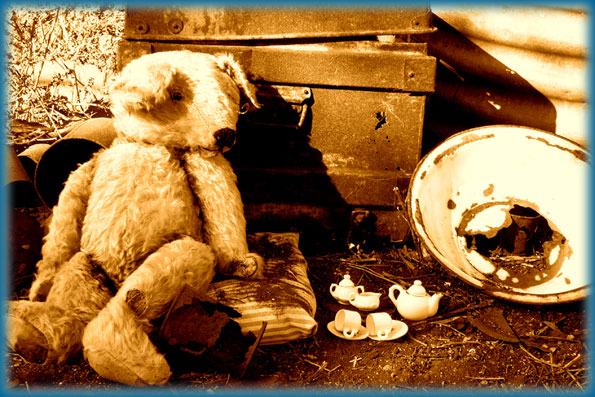 A teddy bear sits on a mattress one glass eye and threadbare paw
Looking at a cuckoo clock which tells it's nearly ten to four
Four o'clock is teddy's teatime, lots of friends and fancy cake
Although it's only pretend eating.... oh how long ten minutes take

Shadows grow on distant hillside, orange sun on glassy sea
All in his amber eye reflected, and still ten minutes left till tea.
The mattress striped is old and broken, rusty springs through stuffing show,
The cuckoo clock is also broken but how's a teddy supposed to know

Unaware he's been abandoned, that this is not the nursery cot
The hills and sea, just glass, old papers on a disused rubbish plot
A telephone that no-one answers, empty tins that once held tea,
The clock that still says nearly teatime, where can all the children be?

For ages now he's lain unwanted, saluting with a threadbare paw
He'll never know he's been discarded, till the clock reads after four
Don't tell him that the clock is broken, as long as teddy doesn't know,
It will always soon be teatime as it was so long ago.